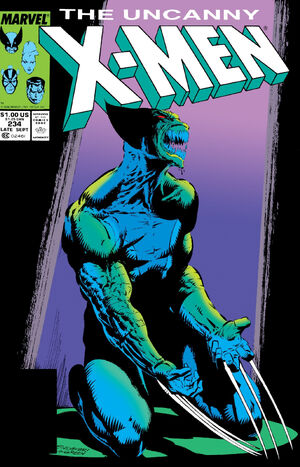 Like Ben Franklin said, bub... only two things certain in life... an' this ain't taxes.

In Denver, the X-Men continue to try and hunt down mutants infected by the Brood and prevent their attempt to try and take over the world. Their battle explodes into the trendy Mile High Diner when Dazzler is thrown through the front window by the fire-breathing Brood known a Spitball. When the patrons believe Dazzler is the villain they grab her until Spitball tries to incinerate them all. Ducking to safety, Dazzler is open to an attack by Whiphand, and she is then knocked out by the teleporting Blindside. When the humans in the diner attempt to attack the Brood, they prove to be no match. Dazzler and the patrons are rescued by her fellow X-Men who arrive in the nick of time. As Longshot saves a diner patron from Spitball, Colossus snaps Whiphand's neck and Storm arrives and summons lightning to slay Blindside. While the other X-Men are checking on Dazzler, Spitball flees the scene and is pulled out of the area by Rogue -- who is still controlled by Temptress's psyche that she accidentally absorbed in an earlier battle.

While back at their secret outback headquarters in Australia, Madelyne Pryor is still knocked out after being blasted by an exploding monitor screen. As Gateway watches over her, she dreams that she is a featureless humanoid forced to choose a path in a long desert. As the beating sun causes her faceless form to melt into her current appearance, Madelyne trips over a skull and tumbles down a hill into cool water. She is helped up by the demon known as S'ym who drapes her in a sheet and brings her to an beautiful palace. There he offers the woman her hearts desire. Madelyne accepts this offer and he shows her the finger nails on his hand. Each nail shows a different aspect of her personality. Believing this to only be a dream, Madelyne chooses the one depicting her as a vengeful woman. S'ym corrects her on her assumption then plunges his finger into her chest, binding the two together and dressing her in strange garb.

Back in Denver, at the Red Rocks auditorium, Reverend William Conover is making last minute arrangements for his sermon. He once more notes the constant arthritic pain his wife feels and once more wishes there was something he could do to cure her pain. As the Reverend leaves to address those gathered, Hanna is approached by Harry Palmer's partner Josey Palmer who tells Conover's wife that she has something that can help her arthritis. While not far away, Rogue is flying Temptress and Wolverine toward the Red Rocks. Logan, even though he is slowly transforming into a Brood resists the conversion with is healing factor. When he revives he slays Temptress and Rogue -- still under her control -- tosses him down to the ground. This causes Psylocke great pain as she (still under Temptress's control as well) travels with Harry Palmer and the other surviving Brood as they race toward the Red Rocks in a car. Their car is stopped when it rams into Colossus. Palmer orders the X-Men dead, and while Psylocke begins shaking free of Temptress's control, Rogue attacks Storm. When Longshot and Dazzler arrive, Dazzler uses her powers to blast Rogue, saving Storm's life.

This interrupts the reverends sermon, and his congregation is horrified when Logan appears before them. The reverend tells them not to fear him, that he needs help. However as Logan begins to transform into a Brood, the priest prays to God to save his life. Logan's healing factor kicks in killing the Brood embryo and causing him to revert to normal, leaving Conover to believe that the power of prayer saved Logan's life. The reverend is then attacked by Tension, but Havok arrives and incinerates him with a plasma blast. As he wonders if he will continue to find killing so easy he is attacked by Spitball and Lockup, however he is saved by Longshot and the attack causes a wall to collapse on the two Brood killing them.

In the confusion, Harry Palmer has grabbed William's wife Hanna and threatens to kill her. While he keeps the X-Men at bay, Logan crawls under the stage and gets the drop on Palmer, pulling him under the stage. In an attempt to shake Logan's nerve, Palmer reverts to his human form and pretends he doesn't know what he's doing. Logan, unmoved by this kills Palmer with out a single shred of mercy. In the aftermath of the battle, the Psylocke uses her powers to alter the memories of those present so they don't fully recall who had saved them. When Trish Tilby interviews William he tells her how they were saved by mutants and how people should not discriminate against them. When noticing that Hanna's arthritis has been miraculously cured, Conover wonders if God had something to do with it. Overhearing this, Josey Thomas grins.

As the X-Men return to their base, Havok is commended by Wolverine, however he doesn't feel so proud because he was forced to kill. While down below, Madelyne Pryor still lays, more dead than alive and truly changed from the events that happened in her dream.

Retrieved from "https://heykidscomics.fandom.com/wiki/Uncanny_X-Men_Vol_1_234?oldid=1481238"
Community content is available under CC-BY-SA unless otherwise noted.