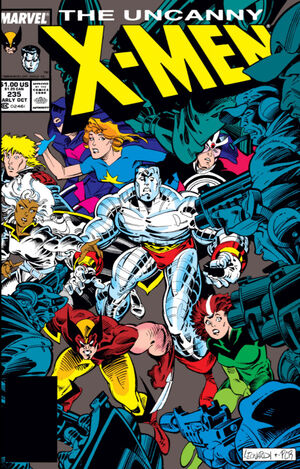 Then comrades, let us end this battle -- once and for all!

Appearing in "Welcome to Genosha"Edit

Synopsis for "Welcome to Genosha"Edit

Welcome to Genosha, a prosperous island paradise... if you're a human. Case in point, a lone mutant flees into the night with its young child using its powers to escape the deadly Magistrates and smuggle the child aboard a commercial jet to Australia. While the mutant succeeds in smuggling the child into the planes landing gear, he himself is spotted and sent fleeing until he is shot and killed by the Magistrates.

When news of the child's discovery hits the newspapers, the Genoshan government sends their Press Gang to collect not only the escaped child, but Jennifer Ransome. Ransome, the daughter of a governor, had her gene testing doctored to appear as though she was a normal human, when in reality she is a mutant. Waiting at the airport, the Press Gang waits for Ransome -- a nurse for the Australian flying doctors service -- to arrive. She arrives in a plane flown by Madelyne Pryor. When they disembark from their plane, the Press Gang attacks them head on. When Jennifer pleads that she is innocent and an Australian citizen, they tell her that a Genoshan born is always a Genoshan and subject to their law. The two women are easily over-powered by the super strong Punchout. They are then taken to Pipeline who uses his special modem to convert both Jennifer and Madelyne into data and electronically transmit them to Genosha for processing.

With Madelyne unaccounted for for a few hours, the X-Men decide to investigate, sending Rogue first who spots Madelyne's wrecked plane. Gateway then teleports both Storm and Wolverine to the location to investigate the wreckage and Logan determines there was some kind of struggle as the two women were dragged onto a jet that just recently left. Relaying this information to Alex (who is surprised about how concerned he is over Madelyne) scans the flight data using their hideouts sophisticated computer systems. Finding them difficult at first, he manages to track the flight to Sydney, Australia. Soon the entire team is dispatched to the Sydney Airport where Wolverine determines that the scents of their kidnappers is still fresh in the plane, but those of Madelyne and Jennifer are not as such, as though they got on the plane but left well before their kidnappers did.

Tracking the Press Gang's scents, Logan and Rogue find themselves at a hospital where they put on disguises to sneak into the pediatric ward. When they are stopped by Punchout, Logan recognizes her scent as one of the kidnappers and attacks. When Punchout knocks Wolverine back and tries to land a blow on Rogue, Rogue absorbs her super-strength and knocks her out. When Logan and Rogue confront Hawkshaw and Pipeline, they panic and use Pipeline's modem to transmit a Magistrate soldier who blasts them out of the building. Seeing that they need reinforcements, they then summon and entire squad of Magistrates to their location to deal with the mutants that have come to oppose them while they go looking for Punchout.

While the other X-Men approach the hospital they are soon attacked by the Magistrate soldiers transported to the hospital. Despite their superior fire power, ruthless nature, and complete disregard for human life, the Magistrates are soon easily defeated in combat by the X-Men who bind them up, and flee when they hear the authorities coming, Psylocke altering their memories so they cannot clearly remember who attacked them. Meanwhile, Pipeline and Hawkshaw comes across Pipeline as well as Wolverine and Rogue, who are still knocked out. Realizing that they cannot be detected on any of their scanning equipment, they decide that the two X-Men are of interest and have them teleported to Genosha for examination.

While later, when the authorities arrive they find the Magistrates all bound up in steel girders with the X-Men's calling card. When they ask the Magistrates what happened they refuse to talk and the officer tells them that whoever did this to them will likely come back for more information from them, and whatever might happen might be more than they'll deserve.

Retrieved from "https://heykidscomics.fandom.com/wiki/Uncanny_X-Men_Vol_1_235?oldid=1501477"
Community content is available under CC-BY-SA unless otherwise noted.