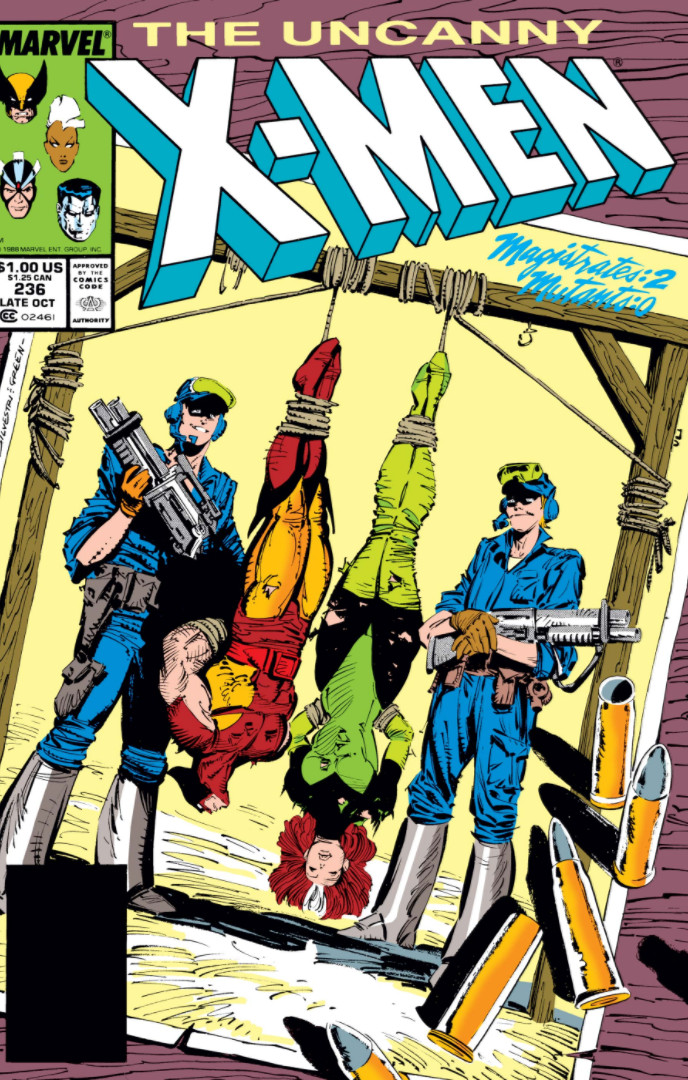 We're someplace called Genosha, partner... an' these rowdies are the local gestapo, call themselves the magistrates.

Wolverine and Rogue have found themselves transported to Genosha, an island nation that forces it's mutant population into slavery, and they are not happy about it. Fighting their way through the Magistrates that await them when they are transported by the Press Gang member named Pipeline, the two mutants fight off their captors and manage to bust out of the extraction room. In the next room they find Madelyne Pryor and Jennifer Ransome prisoners. However, before they can rescue their friends, the Genoshan known as Wipeout nullifies their powers.

Elsewhere on the island, Philip Moreau, son of David -- the Genegineer of Genosha -- is awoken by an early morning phone call for his father. Going out to see his father working on the garden, tells him that he is needed right away. When a craft comes by to pick him up, it burns some of the grass, however one of the mutant slaves Mutate #7781 uses it's powers to repair the damage done while Philip goes on his morning job before classes. As the Genegineer is flown to the Genoshan capital, he is briefed by Chief Anderson who tells him about the two mutants that were brought to Genosha by the Press Gang. She explains that they are invisible to any of their equipment scans and that any attempt to record or search information regarding them turns up nothing. Data entered into their databases also leads to the data being deleted, making them wonder if a virus is at work. When checking in on the two, they find Wolverine passed out and Rogue in a catatonic state. Anderson explains to the Genegineer that some of her Magistrate troops had their way with her before they were discovered and she has been in that state ever since. She explains that the Press Gang are still in Australia working to extract the soldiers that were arrested there after their clash with a group of unknown mutants.

This happens to be the X-Men, who teleport into the captured Magistrates cells and demand answers. When the guards refuse, Storm orders Psylocke to probe his mind. Doing so she learns all about Genosha, and how it has enslaved it's mutant population as a worker class. Disgusted by what she sees she lashes out on them until Storm orders her to stand down. As they teleport back to their base, Psylocke warns them that if their friends have suffered at their hands she will make them pay. Just after the X-Men depart, the Press Gang break into the prison to free their comrades. The X-Men meanwhile go from their base, learn what Betsy has pulled from the minds of the Magistrates and teleport off to Genosha to rescue their friends. While deep below their base, the demon known as N'Astirh attempts to contact Madelyne Pryor via the bases communications system, but finds that nobody is there but assures that he will be back later.

While elsewhere in Genosha, Phillip Moreau goes on his daily jog when he sees the Ransome family being arrested by the Magistrates. As Jenny is his fiancée he demands to know what's going on. Instead of answers, Phillip is roughed up by one of the Magistrates until he realizes who the boy is and lets him go. They explain that the Ransome family was found guilty of switching Jenny's gene scan with some other girls. Phillip does not want to believe it and flees the scene. In the holding cells, Rogue continues to withdraw into herself following her first "intimate" encounter with people being a near rape. In her subconscious mind she finds traces of the psyches of all those who she had touched when her powers were still active. There she runs into the psyche of Carol Danvers, who asks Rogue to let her take over as her military training skills can help get them out of the trouble they are in. With no options or guarentees that Carol will return control back to her, she agrees to do so. When Magistrates enter her cell to rough her up for the trouble they got in earlier, Carol uses her combat training to easily beat them and steals one of their uniforms and keys. She then goes to Logan's cell and finds that Logan is in pretty rough shape due to having his powers nullified. Recognizing Carol's personality, Logan tells her to leave him, but she refuses to do so after he saved her from the KGB many years earlier. Dressing Logan up in one of the uniforms they sneak out of their cell block and find that Madelyne and Jennifer are missing.

Back at the Genegineer's residence, Phillip accesses his fathers computer and learns the truth, that his Jenny is a mutate and that she was to be re-engineered as a mining slave. When he father enters the room, he demands answers and when he realizes the shocking truth -- that Genosha's prosperity has come on the backs of mutant slaves, he cannot bring himself to believe that Jenny is a mutant, or that she is going to be genegineered into a slave. His father grimly tells his son that it has already been done.

Back at the Citadel, guards begin the genegineering process on Madelyne and Jennifer, when suddenly N'Astirh appears on one of the monitors. Seeing that she is busy, he asks if he should call on her another time, Madelyne tells the demon to come later and the monitor suddenly explodes. While not far away, Logan and Carol decide to try to sneak out of Genosha in a craft, fighting their way through guards and stealing one they make a clean getaway. Carol tells Logan that they'll get their powers back and when they do, they'll come back and make the Genoshans regret every crossing paths with them.

Retrieved from "https://heykidscomics.fandom.com/wiki/Uncanny_X-Men_Vol_1_236?oldid=1495933"
Community content is available under CC-BY-SA unless otherwise noted.