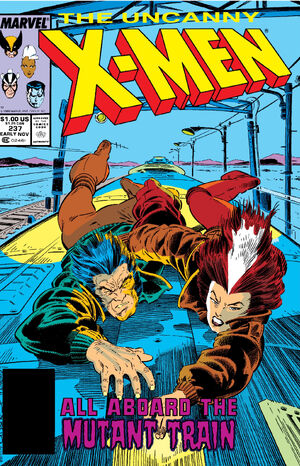 By all I hold holy, I swear... I'm gonna bring this flamin' country down!

Having detected the transport that Logan and Rogue (whose Carol Danvers persona has taken over her psyche) stole as it flies across the Indian Ocean. However, when the Genoshan Magistrates board the ship they find that it is empty and has been booby trapped. Although they narrowly avoid casualties, it informs them that the two loose mutants are still on Genoshan soil. While Chief Anderson finds this a relief, the Gengineer -- David Moreau -- still finds that this who incident still has the potential of being an utter fiasco. They both find the idea that two mutants who have had their powers nullified by Wipeout incredible and are frustrated by the fact that their scanners still cannot detect them. Further, attempts to use their technology to examine the two mutants proved equally as frustraiting as any data about Wolverine and Rogue entered into the computers was instantly erased. However, all the hard copy work remains intact and the Gengineer is happy to see that the nullification of Logan's powers has caused his hemoglobin count to drastically drop, and that he will die within the day.[1]

Meanwhile, in the streets, Logan and Carol attempt to keep a low profile and upon catching an promotional video on Genoshan prosperity, Logan finds it a crock as it has come from mutants being slaves to the human population. After watching some Magistrates giving a garbage clearing Mutate a hard time, Logan reunites with Carol who has put on a revealing outfit. She explains that this will help them steal some new security passes, as the ones they lifted from the Magistraites they jumped in the Citadel would likely have been red flagged by now. Entering a bar full of Magistrates, Carol does her thing while Logan keeps a low profile. Also in the bar is Philip Moreau, drinking his sorrows after hearing his fiancée Jenny had been tagged as a mutant and is to be shipped off the slave camps. When the Magistrates pick a fight with Philip, Logan uses it as an opportunity to escalate the fight into a full on bar brawl. In the middle of the fight, Logan and Carol grab as many security passes as they can get and high tail it out of the bar. However, when Phillip is tossed outside he overhears the Magistrates who bring the fight out with him recognize him as the Gengineer's son. They decide to teach the boy a lesson by putting him in a Mutate skin-suit and tossing him on the next Mute train out of town. Thinking this might be something of benefit for them, Logan and Carol decide to follow after them and board the Mute Train -- which they are disturbed to see is powered by mutant slave.

At the Citadel, Jenny -- who is just beginning the gengineering process to change her healing powers into ones that can form rock and minerals is brought before the Gengineer. When she begs David not to do this to her, he tells her that a Genoshan citizen has to do their part for the prosperity of their country, and that without the mutant workers they would not be able to maintain their quality of life. When he is told that Mutant-9818 (Madelyne) is ready for psi-scans he tells the guards that Mutant-9817 (Jenny) is ready for final processing. In the psi-scanning room, the technicians bond Madelyne's skin suit to her body and begin psi-probing her mind, however she warns them to stay out and begins to resist the psi-probe.

Meanwhile, the other X-Men arrive on the island before a convoy of Magistrates that are on patrol. The soldiers are shocked to see that none of the mutants register on their scanning devices and the X-Men make short work of them. With the Magistrates defeated, Storm orders Psylocke to scan their minds for useful information. She finds rudimentary psi-screens but as she attempts to cut through them she suddenly reels back and screams in pain. This is caused by Madelyne, who has caused a psychic backlash on her psi-probers that they are all slaughtered and sends out an alarm to the Magistrates who escort an increasingly weary Gengineer to her location. When Betsy recovers from the attack, she tells her friends the source of the psychic scream was shielded from her.

While aboard the Mute Train, Wolverine and Carol realize that they need to take cover inside the train. Logan opens the door with one of his claws and Carol is surprised when Logan begins to bleed heavily. Bandaging up his hand he explains that his healing factor used to heal the woulds every time his claws would pop out, cutting through his skin. Carol realizes that Logan has been getting weaker by the hour and realize that if they do not do something soon, Logan will die. They find Phillip Moreau among the Mutates, and as they are recovering him the mutants aboard the train begin to swarm them. This is until other Magistrates board the train, having detected the disturbance, and begin beating down the mutants. When the captain demands answers from Logan and Carol (not realizing they are escaped mutant prisoners) they explain that they came for Moreau's son. The captain tells the two to get the boy out and bring him to turn the boy over to their superiors to let them handle it.

As Logan and Carol carry the unconscious Philip to a jeep, Logan is furious at the sight of mutants being beaten by their slave masters and swears to Carol that he will not leave Genosha until he brings the entire country crashing down.

Retrieved from "https://heykidscomics.fandom.com/wiki/Uncanny_X-Men_Vol_1_237?oldid=1481233"
Community content is available under CC-BY-SA unless otherwise noted.