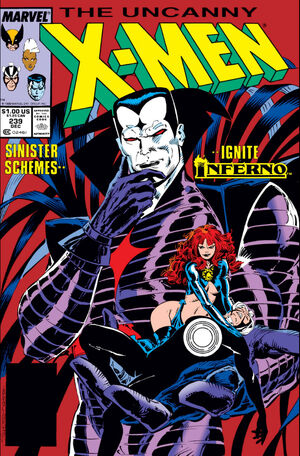 I could save you. But it's best that I don't.

In Manhattan the Empire State building starts to grow, demons possess many technical things like elevators and telephones.

In a secret hideout Mr. Sinister thinks about the X-Men as Malice rushes in. She tried to separate from Polaris’s body and discovered that they are permanently bonded. Sinister says, that this was the reason why he ordered her to possess Lorna Dane, he knew that the woman’s hidden hate, combined with the interaction of the unique energy matrices would lead to such a result. Malice is very angered, but Sinister convinces her, that this is for the better, for now she is the only unique and irreplaceable member of the Marauders. The missing baby of Cyclops and Madelyne is also seen in his secret hideout.

In Australia, Dazzler uses a day off to do the single thing she loves most – singing. She and Longshot enter a bar and Alison is allowed to sing with the band. The audience loves her.

Havok thinks about how much rejoining the X-Men changed his life, not only did he have to fight the woman he loves, he also had to use his powers to kill, even if it were only Brood. Madelyne comforts him.

Storm researches some video footage, and discovers the interview with X-Factor's Cyclops and Marvel Girl. She is shocked to see her best friend alive. Immediately she tells Wolverine, who said he already knew; twice he caught her scent[1] he did not say anything, because he did not trust his senses, he thought he was going mad to smell the woman he loved.

In an underground cave Psylocke fights Rogue and Colossus in a training session. At first she does good, distracting them with her telepathy, but with teamwork she is defeated. Rogue holds her and Psylocke asks her to let her go, yet Rogue refuses with a "Make me". Psylocke gives Rogue a mind-blast and knocks her out. Rogue gets up, again the eye colour change from green to blue occurs, while Rogue is out of the picture Carol has taken over again. Psylocke decides to take a bath in an underground lake, after the tempers cooled down, she and Carol talk it through, Carol touches Betsy with the bare hand and is able to hold Rogue’s absorption powers in check.

Slowly Madelyne and Alex seem to fall in love. They both lost the loves of their lives and now are all they have left. They spend a night together. Later Madelyne calls N'astirh and makes a bargain. Madelyne wants the Marauders found (who nearly killed her and stole the baby), but most of all she wants her son.

Retrieved from "https://heykidscomics.fandom.com/wiki/Uncanny_X-Men_Vol_1_239?oldid=1518310"
Community content is available under CC-BY-SA unless otherwise noted.