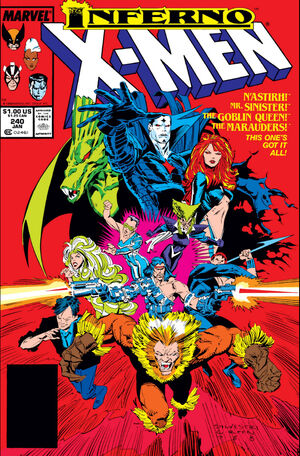 Appearing in "Inferno Part the First: Strike the Match"Edit

Synopsis for "Inferno Part the First: Strike the Match"Edit

Alex Summers and Madelyne Pryor have decided to spend the evening at the Rainbow Room in Manhattan. They have a romantic evening and can't help but notice that the place is empty and that the weather in Manhattan has been unseasonably warm. Their evening is interrupted by a group of paranormal investigators who have come to set up equipment to monitor the Empire State Building, which they believe is growing in size. Their disturbance upset the owner of the shop and the scientists are kicked out. As they enter the elevator they are surprised when the walls come to life an and attack them. While Havok talks to the owner, Madelyne examines the Empire State Building through binoculars and sees it as it really is and is happy. When Alex rejoins her the two decide to return home to their secret hide out in Australia. As they enter the elevator, Alex finds one of the scientists pairs of glasses and wonders what happened. Madelyne, noticing the scientists are now part of the demonic mural in the elevator dismisses their abrupt departure and the two are soon teleported back to Australia by Gateway. When Alex tries to spend more time with Madelyne, she decides to have some alone time and is teleported away by Gateway. Realizing she's upset, Alex thinks he can come up with a way to help her and rushes towards the X-Men's base.

Madelyne, having adopted her Goblin Queen persona has come to Bard College where she finds the grave of Jean Grey. She is angry that her husband Scott Summers supposedly gotten over his love of Jean when they married and angrily destroys Jean's tomb stone. Coincidentally, Jean's parents John and Elaine had come to the grave site and mistaking Madelyne for Jean, they are easily overpowered and transformed into demons, something she finds incredibly funny. When N'Astirh joins her, she demands that he bring her to her son otherwise face her wraith. N'Astirh complies and the four beings are teleported away.

Back in Australia, Rogue has taken to wearing some of Dazzler's clothing and trying to teach Longshot how to roller skate. When Dazzler jealously confronts her, she upsets Longshot when she suggests that he is her own private property, not realizing that while she loves Longshot he only regards her as a friend. This leads to a fight that tramples into an artists session of Colossus who is sketching Betsy in the nude. Seen on the monitors by Alex, he comments to himself how Longshot should be careful with Dazzler's feelings. Using the devices, Alex manages to track down the Marauders. When he realizes that Wolverine and Storm have sneaked up on him, he tells the two that he has tracked the Marauders to the Alley where they had originally slaughtered the Morlocks.

Meanwhile, N'Astirh has teleported the Goblin Queen to a complex below an orphanage in Nebraska where she finds device similar to the Crech's she saw in Genosha. Wondering what it is, she gets a vision that suggests that she was grown in there. When she looks at the plaque she finds that the experiment inside was called "Madelyne".

While in the Alley below Manhattan, the Marauders are settling into their new headquarters when Blockbuster runs into the X-Men down one of the darkened alleys. He is knocked flat by Colossus, starting the X-Men's ambush on the group. The X-Men are out for blood and attack savagely, taking the Marauders by surprise. In the confusion of battle, Blockbuster is surprised when the wall behind him suddenly comes to life and swallows him whole. The battle takes another turn when Polaris uses her powers so snare Colossus and she gets into a "tug" of war with Storm, who pits her wind generating power against Polaris' magnetic abilities -- the loser would be pummeled to death by Colossus's body. However Polaris turns the tables by causing Colossus to smash through the top of the tunnel allowing the Marauders to escape to the surface above. When the X-Men follow after them both groups are shocked to see the entire city has undergone some transformation.

Back in Nebraska, the Goblin Queen is furious over the lack of answers that N'Astirh has provided when they are both confronted by Mr. Sinister who tells Madelyne that he is her father.

Retrieved from "https://heykidscomics.fandom.com/wiki/Uncanny_X-Men_Vol_1_240?oldid=1579482"
Community content is available under CC-BY-SA unless otherwise noted.