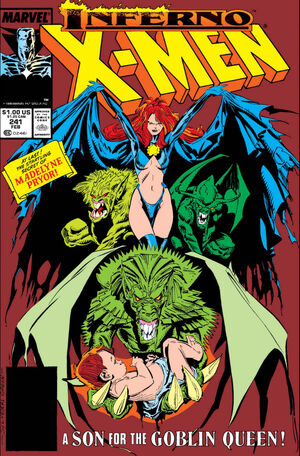 But you Madelyne Pryor -- my pride, my first and foremost joy -- may call me... FATHER.

Appearing in "Inferno, Part the Second: Fan the Flames!"Edit

Synopsis for "Inferno, Part the Second: Fan the Flames!"Edit

Madelyne refuses to believe that Mr. Sinister is her creator. Instead she and her pet "Grey" demons attack him, because he is the mastermind behind the Marauders, who stole her baby. But the orphanage is Sinister’s headquarters, he has built in defensive systems, that chain the Goblin Queen and use her own energies against her. She calls to N’astirh for help, but he remains hidden in the shadows.

In the transforming New York, the X-Men continue to fight the remaining Marauders. Colossus is shocked to see Riptide among them, for he killed him during the Mutant Massacre. The police, riding demon-transformed police cars interfere. Polaris / Malice destroys one of the vehicles and hurls the debris against the X-Men, while Vertigo uses her powers to create a general nausea. The X-Men are almost defeated when Longshot throws randomly a blade, which hits a sign over Vertigo's head; it falls down and knocks her out. The fight continues and the X-Men fight more aggressive than ever, Havok even uses his power in full force killing Harpoon.

The Goblin Queen continues to ignore Sinister, she thinks of herself as a normal person with parents and a past. Mr. Sinister asks her that she tell him of her past memories to prove it. Madelyne tries to remember and comes up with an incident at the age of ten; she was playing with her best friend Annie, but suddenly she was hit by a car. Mr. Sinister finishes the story, the ten-year old redhead holds her friend in her arms, and suddenly she found herself in her friends head, sharing her last thoughts as they went out. Madelyne asks how he knows, Mr. Sinister explains that this is a memory of Jean Grey, actually it is the day when Jean’s power manifested. Back then Jean was put in the care of Professor X who trained her. Originally Sinister had planned to kill her parents, that Jean would have been brought to the orphanage, but he was too late, so he came up with the plan to steal a blood sample of Jean and clone her. Later though, when the clone hit puberty he was disappointed to see that she did not develop mutant powers. Then one night her incubation chamber exploded in a bird of fire, and the clone shouted "Scott" before passing out. In the shadows N'astirh thinks that if he saves Madelyne, she would be totally under his control, he leaves.

In Manhattan some of S'ym's techno-organic demons recognize the X-Men and the Marauders; they join the fight and shoot Prism. The X-Men kill off the whole squad, besides one who is captured by Colossus. He recognizes the species from his stint in Limbo. Colossus interrogates the demon and is surprised to hear that his sister Magik is no longer Limbo's ruler, because she was overthrown by N'astirh and S'ym. They also plan to transform the whole earth into Limbo, casting a special spell on the Empire State Building. Colossus smashes the demon to pieces and as his teammates cheer at him, he realizes that the demonic surrounding has a bad influence on them, only he is protected by his armored form, because iron shields against magic. He decides to search for his sister, because saving her might end Inferno.

Mr. Sinister continues his story. He researched that the exact instant "Jean" aka Phoenix sacrificed herself on the moon and it was the moment when the bird of fire appeared at the clone tube. He thought that they were connected like twins and now with potential powers he wanted to create the perfect child with her and Cyclops, so he designed a cover identity and memories for Madelyne and organized for the pair to meet. Everything happened as Sinister foresaw and wanted, till Jean Grey was found alive at Jamaica Bay. He knew that if the two would ever meet, Jean would telepathically discover the truth, so he ordered the Marauders to kill Madelyne and steal the baby, but they botched the job.

In New York the X-Men dealt with all Marauders except for Polaris/Malice who got away. Longshot is concerned, how his teammates become more and more bloodthirsty. Suddenly N'astirh appears and bites him in the arm. Havok tries to nail him with a blast, but the demon vanishes, promising to feast on the X-Men’s souls like he just had Longshot. During the fight Dazzler seems more concerned with her beauty. The X-Men prepare to follow N'astirh, but suddenly Wolverine’s senses pick up someone he knows.

In the orphanage in Nebraska Sinister tells Madelyne, that the failed assassination did not matter, since she died a short time later in Dallas. To his surprise she is now back alive and invisible to all technical sensors as well as she has displayed powers he never knew that she had. He plans to dissect her, to discover what changed her. The Goblin Queen gathers more and more energy till she overloads Sinister's defense systems. Before the two start a fight, N'astirh, now techno-organic, arrives on the scene again. He hands the baby over to Madelyne. The Goblyn Queen is thankful and loyal to N'astirh, she tells Sinister that she will destroy the baby, for it represents all of Sinister's manipulations and all of Scott Summers' hopes and dreams, and with this sacrifice she will give herself completely to the fire, to Inferno.

Retrieved from "https://heykidscomics.fandom.com/wiki/Uncanny_X-Men_Vol_1_241?oldid=1519437"
Community content is available under CC-BY-SA unless otherwise noted.