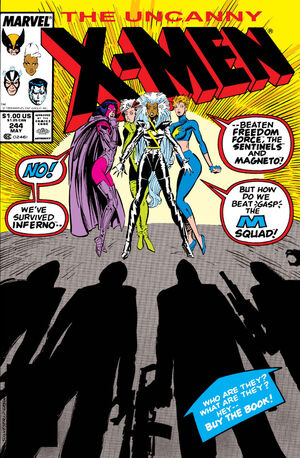 You wanted to know, Alison... why we are necessary?! Here is the reason! People like her, mutants like ourselves -- for if we don't stand up to defend them, who will?!

In the Hollywood Mall in Los Angeles a young teenager calling herself Jubilee uses her mutant powers to generate light and small fireworks to entertain mall patrons for money. The mall security notices the young performer and attempts to apprehend her. After an unsuccessful attempt, they decide to call a group of mutant hunters called the "M-Squad" to solve the problem for them. In Australia, Rogue causes friction with her teammates because of her rage at sharing a mind with Carol Danvers. Carol is forced to resume control when the tension rises to a breaking point. Dazzler suggests that tensions could be eased with some fun and shopping. Gateway transports Storm, Rogue, Psylocke and Dazzler to the Hollywood Mall in LA where they are noticed by the young Jubilee. After a few hours of shopping the group notices the commotion of the arriving M-Squad. After dispatching the Squad, and their Inferno enhanced equipment, the four X-ladies return through Gateway's portal, unaware that the young Jubilee has followed them.

Retrieved from "https://heykidscomics.fandom.com/wiki/Uncanny_X-Men_Vol_1_244?oldid=1505988"
Community content is available under CC-BY-SA unless otherwise noted.