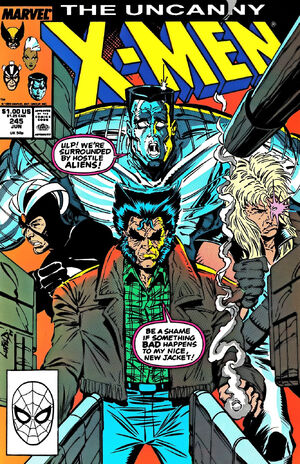 In deep space, a group of interstellar conquerors, comprised of myriad species and calling themselves 'The Conquest', make plans against their newest objective: Earth. Meanwhile in Australia, Wolverine notices the low morale among the men in camp. Taking a cue from Storm's all-ladies trip to LA, Wolverine suggests a trip with the guys to town. Shortly after arriving in Sydney, Wolverine's group, comprised of Colossus, Longshot, Havok and himself, witnesses the arrival of the invading Conquest. The reactions of the citizens of Sydney confuse the Conquest causing their leadership to decide to cut their loses and activate a bomb of unimaginable devastation. A half inebriated Havok destroys the command ship before the bomb is activated, saving the day and stranding the strike force members of Conquest. Meanwhile, in the highlands of Kentucky, Tessa of the Hellfire Club is shown a devastated installation that once imprisoned the now free Donald Pierce, the former White King.

Retrieved from "https://heykidscomics.fandom.com/wiki/Uncanny_X-Men_Vol_1_245?oldid=1572103"
Community content is available under CC-BY-SA unless otherwise noted.