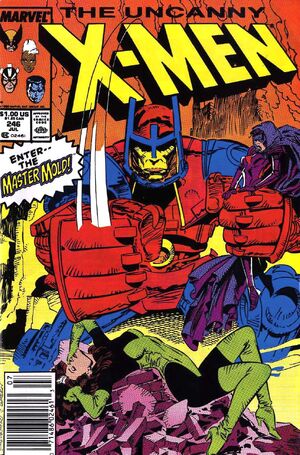 Appearing in "The Day of Other Lights"Edit

Synopsis for "The Day of Other Lights"Edit

Dazzler looks into the Siege Perilous and sees herself dying whilst Wolverine decides to leave to take care of some business. Carol Danvers (in control of Rogue's body) visits her brothers grave and Senator Kelly says no to funding for new sentinel projects. Nimrod gets turned into Master Mold and is then attacked by Carol. In the midst of the battle Senator Kelly’s wife Sharon is shot by Nimrod's eye blasts.

Retrieved from "https://heykidscomics.fandom.com/wiki/Uncanny_X-Men_Vol_1_246?oldid=1403771"
Community content is available under CC-BY-SA unless otherwise noted.