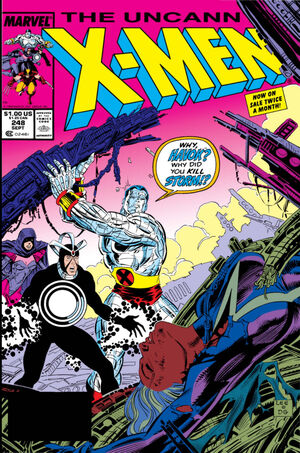 Appearing in "The Cradle Will Fall"Edit

Synopsis for "The Cradle Will Fall"Edit

Donald Pierce and his new compatriots, the Reavers, practice their coming attack on the X-Men. Meanwhile, back in Australia, Longshot dreams. In the state of Dreamtime, brought on by Gateway, Longshot speaks with Storm and tells her that he must leave the group to search for his identity. Nanny and the Orphan Maker, knowing of the coming deadly conflict with the Reavers, finalize their plan to save the X-Men, quite against their will. They arrive at the X-Men camp and swiftly capture Psylocke, Havok and Dazzler. The three captured X-Men are placed in armor, designed by Nanny, which bend the X-Men against their will. The three are then forced to use their powers against the still free X-Men, Storm and Colossus. During the following conflict Havok is freed from his armor. Still groggy, he fires a plasma discharge at Nanny's fleeing sky ship, which crashes to the ground, exploding on impact. To his horror, Havok is informed that the ship carried not only the fleeing Nanny and Orphan Maker, but the captured Storm as well. She is found dead among the debris.

Retrieved from "https://heykidscomics.fandom.com/wiki/Uncanny_X-Men_Vol_1_248?oldid=1403773"
Community content is available under CC-BY-SA unless otherwise noted.