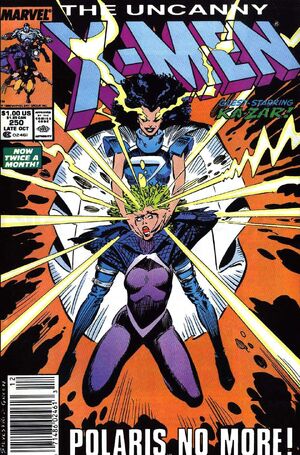 Way to go, babe! Busted up those sludge-heads real good! Never see you do -- or look -- better!

Appearing in "The Shattered Star"Edit

Synopsis for "The Shattered Star"Edit

Zaladane and her forces return to Antarctica and their towered fortress in the Savage Land. Havok reveals himself only to be captured. Bound and drugged to prevent him from using his powers, he is forced to watch as Zaladane steals the powers of Polaris. Dazzler, Colossus, and Psylocke arrive on the scene and are immediately ambushed by the Savage Land Mutates. After the X-Men are captured, they are brought before Zaladane. Polaris, to everyone's surprise, begins to manifest new powers of strength and invulnerability. Swiftly, she frees the rest of the X-Men and other prisoners who revolt against Zaladane. With the tower in flames, the X-Men flee the fortress in a sky-sled, only to realize that Zaladane is still alive and has activated the tower's defensive shields. Before the X-Men can decide their next move, they are teleported back to their base in Australia by Gateway, much to the concern of Psylocke who experienced the X-Men’s death in a precognitive vision.

Retrieved from "https://heykidscomics.fandom.com/wiki/Uncanny_X-Men_Vol_1_250?oldid=1493969"
Community content is available under CC-BY-SA unless otherwise noted.