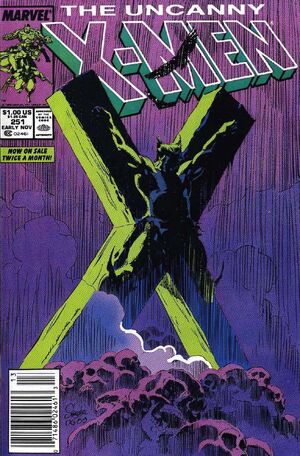 This round then, to you. Enjoy the taste of victory, little man. You have my word. It'll be your last!

Wolverine, beaten and bruised, hangs from a wooden X outside the X-Men's base camp. Donald Pierce, Wolverine's captor, continues to torment the shackled Wolverine, who begins to hallucinate. In his delusions, in actuality one of Gateway's "Dreamtimes", Wolverine witnesses the past. He watches the X-Men return from their trip to the Savage Land. Next he is visited by phantoms of various acquaintances, both friends and foes. He sees his own return to town, and his subsequent capture. Again, his vision returns to arrival of the four X-Men from the Savage Land. As the Reavers approach the X-Men's position to attack, Psylocke opens the Siege Perilous and telepathically cajoles the X-Men to enter. Arriving too late, Pierce is furious at the loss of his prey. Back to reality and the present, the town comes under the fury of a powerful storm that seems to be encircling the whole globe. While the Reavers wait out the tempest inside, Jubilee summons the courage to approach Wolverine. To her surprise, Wolverine frees himself from his X-shaped crucifix. Lacking the strength to even stand, Wolverine asks the young Jubilee for help.

Retrieved from "https://heykidscomics.fandom.com/wiki/Uncanny_X-Men_Vol_1_251?oldid=1403776"
Community content is available under CC-BY-SA unless otherwise noted.