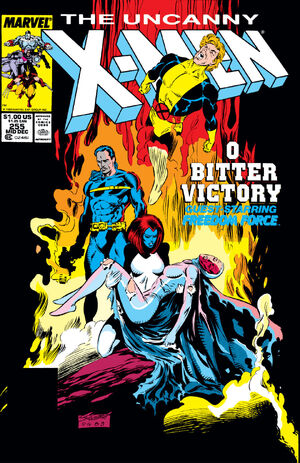 Hullo Legion. Were you perhaps expecting to find two of us here to serve your pleasure... silly boy?

Freedom Force arrive at Muir Island to help stop the Reavers attack, but with disastrous consequences to the team: Avalanche is wounded by Lady Deathstrike and Donald Pierce kills Stonewall. Meanwhile Destiny is murdered in cold blood by Legion, who also snuffs out Pyro's flame attack at a critical moment in the fight. In the end, Forge (who was sent off into the battle by Destiny after being ordered to serve as her bodyguard by Mystique) turns the battle against the Reavers with his new sniper rifle, that is capable of destroying Pierce's cyborgs. Killing Skullcrusher, the Reavers escape. Afterwords, Mystique and Freedom Force leave, with Mystique vowing that Forge will pay for causing the death of another one of her loved ones. Forge meanwhile shares his dream to Banshee, that Storm and the rest of the X-Men are still alive, as Forge joins the team.

Meanwhile in China, Matsu'o Tsurayaba and the Hand discuss their fiendish plans for Psylockes, having recently taken custody of the X-Man. Meanwhile, the possessed by the Shadow King Inpsector Reisz murders a doctor and enslaves Lien Shen as the amnesiac Storm watches struggles to escape her pursuer.

Retrieved from "https://heykidscomics.fandom.com/wiki/Uncanny_X-Men_Vol_1_255?oldid=1403781"
Community content is available under CC-BY-SA unless otherwise noted.