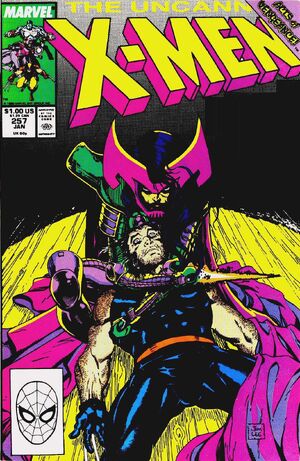 I am Lady Mandarin. Yield, warrior -- or suffer the consequences!

In the service of the Hand and the Mandarin, the brainwashed Psylocke establishes herself as Lady Mandarin, reestablishing the Mandarin's control over the Hong Kong underworld. With that accomplished, her master, Matsu'o Tsurayaba, orders her to take care of a potential, recently-arrived enemy, Patch. Wolverine has come to Hong Kong with Jubilee's help, although he is still suffering both from his extensive injuries and from hallucinations. He and Jubilee visit Rose Wu, a friend of his working for Landau, Luckman & Lake. While shopping, Jubilee and Rose’ granddaughter are kidnapped by Psylocke. The Ninjas later confront Wolverine. Logan has the upper hand in the battle until he recognizes his teammate, Psylocke. She uses his confusion to take him out. In Cairo, Illinois, Storm, changed to a prepubescent child, is on the run from both the police and the Shadow King, not remembering her life with the X-Men. On Muir Isle, Banshee, who feels a wrongness, asks Forge to install a backdoor into the defense system he's installing, so that they can slip back in undetected, should something be wrong. Polaris fears that the wrongness is her fault. Before she can act on this, though, she is taken prisoner by the mentally instable telepath Legion.

Retrieved from "https://heykidscomics.fandom.com/wiki/Uncanny_X-Men_Vol_1_257?oldid=1506017"
Community content is available under CC-BY-SA unless otherwise noted.