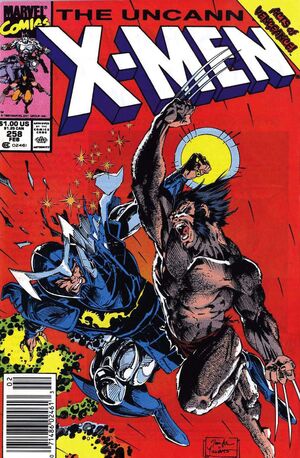 You're real slime, you know that?

The Hand has put Wolverine into a sensory deprivation tank and now Psylocke tries to brainwash him for the Hand. Meanwhile, Jubilee starts a scene and is caught and led away by the Mandarin. A short while later, chaos ensues after Psylocke forges a mental connection with Wolverine through her psychic blade. Suddenly, she is tapped into his psychosis and reacts to his phantom versions of Nick fury and Carol Danvers as real. Wolverine uses the confusion to break out of the tank and faces Psylocke. A little later, Psylocke presents Wolverine's lifeless body to the Mandarin, announcing that he is dead and causing an enraged Jubilee cuts loose with her powers. Psylocke, who has her old personality back, attacks the Mandarin. Severely outmatched, she orders Jubilee to flee with Wolverine. Before the Mandarin can kill her, Wolverine threatens him with his claws and they reach a compromise. Later, the three X-Men leave Hong Kong. Jubilee is still distrustful of Betsy, as Betsy is of herself. Wolverine trusts her because he has no choice. On Muir Isle, Forge has installed a defense system and Banshee is still unsettled by the wrongness he senses. Lorna Dane has been imprisoned by Legion. Thanks to her negative influence, his evil, Jack Wayne persona is now dominant and intends to make the entire island his personal playground.

Retrieved from "https://heykidscomics.fandom.com/wiki/Uncanny_X-Men_Vol_1_258?oldid=1506256"
Community content is available under CC-BY-SA unless otherwise noted.