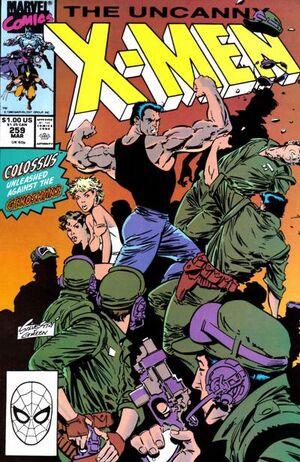 I do not give my word... unless I mean to keep it.

Appearing in "Dream a Little Dream"Edit

Synopsis for "Dream a Little Dream"Edit

Phil Moreau and Jenny Ransome, fugitives from Genosha, are about to be kidnapped by Genoshan Magistrates, when an amnesiac Colossus suddenly shows up and intervenes on their behalf. Grateful, Phil and Jenny offer him a place to stay. In Hollywood, an equally amnesiac Dazzler awakes on the property of her former boss, Lila Cheney, and is taken in by Lila’s guard Guido. Trying to figure out who she is, Alison goes clubbing and meets Fred Stanachek, a young man whom she once helped and who currently holds the rights to her aborted movie. Fred offers to make her a star, while elsewhere Eric Beale schemes to kill her. On Muir Island, Moira has David Haller use Cerebro to find the X-Men or her missing bodyguard, Callisto. David fails but, above him, a spirit image of Amahl Farouk appears, uttering the words ‘Storm’ and ‘Cairo.’ Callisto, in the meantime, is a prisoner of Masque, who promises that he’ll break her. A short time later, a gorgeous woman, who Peter has seen on several ads, runs into him and Peter notices she’s afraid of something. In the meantime, the Genoshan Genegineer and Chief Magistrate decide to get the fugitives back at any cost.

Retrieved from "https://heykidscomics.fandom.com/wiki/Uncanny_X-Men_Vol_1_259?oldid=1501493"
Community content is available under CC-BY-SA unless otherwise noted.