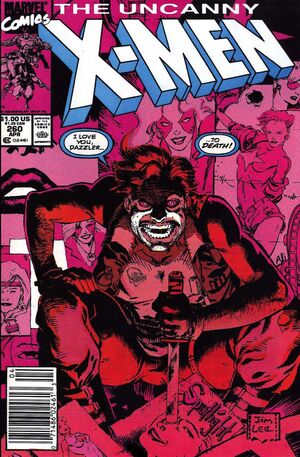 We are Struckers, Andreas. We do not miss.

After a crazed Eric Beale’s attempt on her life, Dazzler agrees to Fred Stanachek's plan to promote Dazzler – the movie, to draw the killer out. She wonders though if this is truly what she wants out of life. Shortly before the premiere, in a careless moment, Ali is abducted and beaten unconscious. Later, almost powerless, she faces a drug-crazed Beale, intending to kill her. Using what’s left of her power to influence her mood, she actually calms and helps Beale and realizes that helping people is what she wants of life. Colossus gets in a fight with thugs wearing X-Men masks, who are chasing his mystery woman and, once again, the woman disappears. Banshee and Forge are on Kyrinos, intending to secretly fly to Cairo. After seeing a magazine with Dazzler on the cover, Banshee decides to look her up first. This turns out to be fortunate, as their plane is destroyed by Fenris.

Retrieved from "https://heykidscomics.fandom.com/wiki/Uncanny_X-Men_Vol_1_260?oldid=1403787"
Community content is available under CC-BY-SA unless otherwise noted.