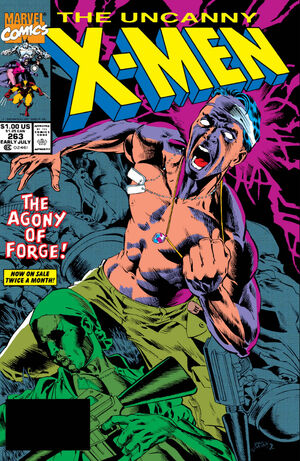 This time, this outfit, I kept my word. I didn't break faith. Alive and safe and whole... I brought my people home!

Appearing in "The Lower Depths"Edit

Synopsis for "The Lower Depths"Edit

Forge and the transformed Jean Grey and Banshee are still in the Morlock Tunnels. Thanks to Forge’s devices, they learn that Peter Nicholas and Callisto have been abducted by Masque and are to be hunted. They decide to help. All the while, Forge has flashbacks to his last mission in Vietnam. Peter makes Callisto see that her exterior doesn’t have to decide who she is as a person, moments before they are attacked. As Masque stabs Peter, he automatically turns into Colossus again. Together with Forge, Jean and Banshee make a run for it, but are almost taken over by Masque, until Colossus stops him. They bluff that they are going to kill him so convincingly that Masque lets them go. Outside the Tunnels, Forge restores Banshee and Jean to their true forms, thanks to the cell samples he took earlier. Later, he says good-bye to the friends he lost in the war, happy that this time he managed to get his friends out. In Washington, Val Cooper has a clandestine meeting with Soviet spy Alexei Vazhin, who is worried about new mutant factions and especially one he cannot yet name.

Retrieved from "https://heykidscomics.fandom.com/wiki/Uncanny_X-Men_Vol_1_263?oldid=1403790"
Community content is available under CC-BY-SA unless otherwise noted.