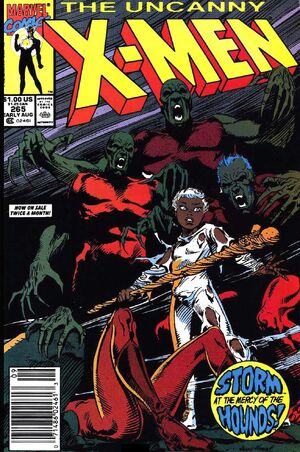 Yes, Ororo, this is a trap -- one from which you haven't a prayer of escaping. Fight as hard as you wish, by all means -- I'll savour every entertaining moment -- but in the end, come what may, and for all eternity -- you will be mine!

As an amnesiac preteen with little, undependable powers, Ororo has reverted to her thieving ways, chased by both Nanny and the Shadow King. The evil telepath eventually sets up a trap in a mansion and Ororo walks right into it. In the meantime, the Shadow King has also taken possession of Val Cooper and ordered her to kill Mystique. Somewhere in space, a warrior race falls to the mysterious Shi’ar champion.

Retrieved from "https://heykidscomics.fandom.com/wiki/Uncanny_X-Men_Vol_1_265?oldid=1403793"
Community content is available under CC-BY-SA unless otherwise noted.