Start a Wiki
Part of the 'X-Tinction Agenda' event 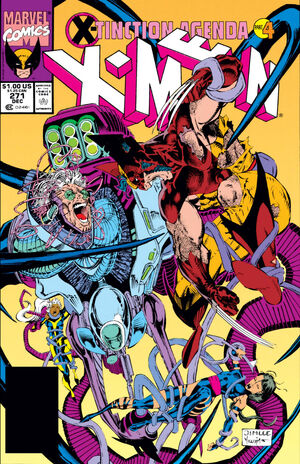 Why is it... you men always seem to talk in macho slogans?

-- Psylocke, while using her psychic knife on Havok

Storm is examined by Forge, but her condition of being stuck in a child’s body seems to be permanent. She renews her deep friendship with Jean Grey who visits from X-Factor. Later the school is attacked by Genoshan troops and surprisingly the missing Havok is with them. Storm realizes that they are outnumbered and taken by surprise and so she decides to lock the underground complex. By this she dooms the fates of herself, Boom-Boom, Rictor, Wolfsbane and Warlock who are all captured and teleported to Genosha, but she ensures that at least the other halves of the teams remain free to prepare a rescue mission. In Malibu Lila Cheney teleports back from outer space and mentions that Xavier is in terrible danger before passing out.

Retrieved from "https://heykidscomics.fandom.com/wiki/Uncanny_X-Men_Vol_1_271?oldid=1505989"
Community content is available under CC-BY-SA unless otherwise noted.