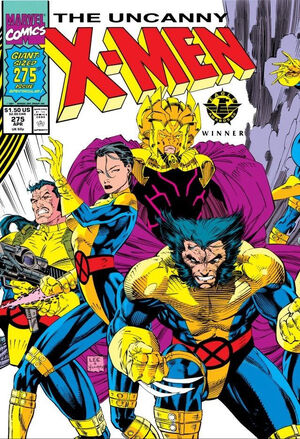 Appearing in "The Path Not Taken!"Edit

Synopsis for "The Path Not Taken!"Edit

The Starjammers led by a mysterious Warlord force their way on the royal Behemoth flagship in order to turn back the Shi'ar Throne to Lilandra usurped by her sister Deathbird, the Starjammer found their welcome by the imperial guard, the x-men are prisoners of Deathbird's pet Manacle, Wolverine freed himself with a little help of Jubilee but he was nearly killed by Deathbird, meanwhile the Starjammers to defeat the imperial guard joined with recently freed X-men, Wolverine recovered with his healing factor and went in hunt of Deathbird, he manage to capture her and brought her before Lilandra.

At the Savage Land, Rogue has made team up with Ka-Zar and Nick Fury. Magneto has been made captive by Zaladane who tortures him and steal his powers through a device created by Brainchild. While Rogue and her team fight against Zaladane and the others Magneto uses the device to regain his powers and then he kills Zaladane, he warns Rogue to abandon the citadel before he smashes it.

Back in Shi'ar Lilandra enjoys her victory over Deathbird and the Warlord reveals himself to be Charles Xavier, the Professor attacked to Oracle and Gladiator make them kneel before him.

Retrieved from "https://heykidscomics.fandom.com/wiki/Uncanny_X-Men_Vol_1_275?oldid=1589662"
Community content is available under CC-BY-SA unless otherwise noted.