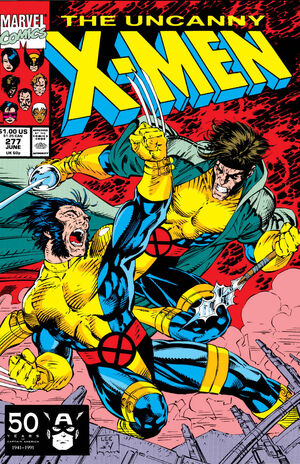 The X-Men fight the Starjammers, who are Warskrulls in disguise. Inside their ship, Gambit helps the X-Men, while Lila Cheney and Deathbird locate the Warskrulls' matrix. Charles Xavier mentally guides Lila to teleport the rest of the X-Men into that chamber where another big fight erupts. At first, Storm, Forge, Banshee, and Gambit hold their ground against Gladiator and Skrull versions of Wolverine, Psylocke and Jubilee; but are taken down by the Skrull Xavier. During the fight, the matrix control was damaged and the real Xavier is freed and defeats the Skrulls. Deathbird leaves and Lilandra get the throne back. Xavier goes back to Earth with the X-Men to battle the Shadow King. Meanwhile, in Salem Center, Colossus (possessed by Shadow King) attacks Stevie Hunter.

Retrieved from "https://heykidscomics.fandom.com/wiki/Uncanny_X-Men_Vol_1_277?oldid=1493641"
Community content is available under CC-BY-SA unless otherwise noted.