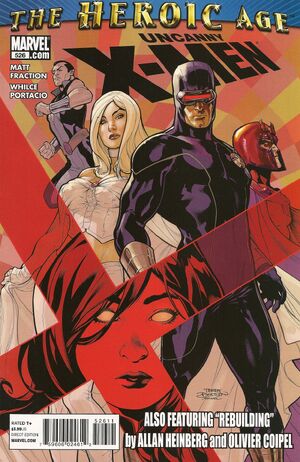 Appearing in "The Five Lights (Part 1): Freak Like Me"Edit

THE FIVE LIGHTS” After the events of SECOND COMING, the X-Men’s world has changed. We can’t tell you much without spoiling the crossover, but here are some words to whet your appetite: Hope, Emma, Namor, Sebastian Shaw. Classic X-Men artist Whilce Portacio is back again for this story-arc of epic proportions!

Magneto's story with the Young Avengers coninunes in Avengers: The Children's Crusade #1

Retrieved from "https://heykidscomics.fandom.com/wiki/Uncanny_X-Men_Vol_1_526?oldid=1758113"
Community content is available under CC-BY-SA unless otherwise noted.