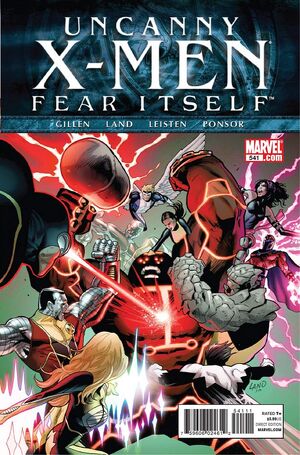 FEAR ITSELF TIE-IN! The X-Men are used to being feared. When FEAR ITSELF finally reaches the west coast, they're going to become well acquainted with the emotion first hand. The unstoppable power of an old foe renewed is heading their way, and they have all the time in the world to realize how little they can do to stop him. And even more time to think about exactly how he's going to destroy San Francisco and everything it stands for. Parts 1 and 2 (of 4)

Although her name is deliberately mentioned, Psylocke is supposed to be part of the 2nd attack team (Joined by Dazzler, Storm and Angel) but is replaced by Cannonball for an unknown reason.

Retrieved from "https://heykidscomics.fandom.com/wiki/Uncanny_X-Men_Vol_1_541?oldid=1757504"
Community content is available under CC-BY-SA unless otherwise noted.