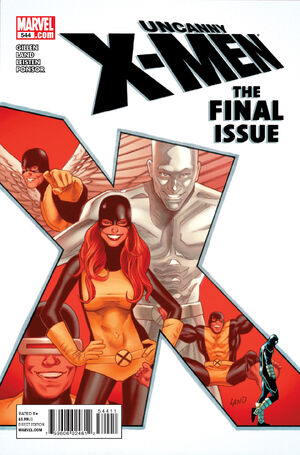 EULOGY After the hammer-blow of FEAR ITSELF and the violence of SCHISM, it can't go on. it's the end of Uncanny X-Men, and who better to provide a stirring eulogy than.... MISTER SINISTER? Join us for the end of the industry-shaping series with the return of the 19th century's morally dubious scientist.

Retrieved from "https://heykidscomics.fandom.com/wiki/Uncanny_X-Men_Vol_1_544?oldid=1650313"
Community content is available under CC-BY-SA unless otherwise noted.