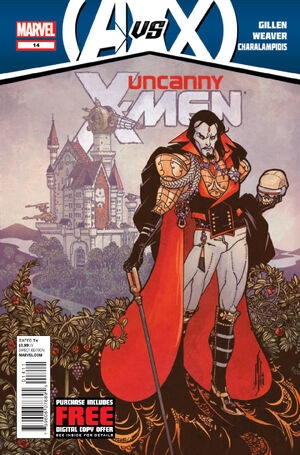 This is how it will be... Scott will look at his cosmic-kissed comrades and say... "We've got this power. We can make a better world. And I think it'd be a better world without Sinister in it." And then he'll come.

After his battle with the X-Men, Mister Sinister has taken his society underground and build a city for his clones, “Sinister London.” Although the Sinister society is thriving, one Sinister; working as a reporter, is uncomfortable. He considers himself an imperfect member of a perfect society. Believing that society’s course is predestined, and therefore unable to change, he plans to assassinate the king, Sinister Prime. And since he has an interview with his royal majesty, he has the perfect opportunity.

As the king shows him the royal cow farms, the reporter asks why there are no milkmaids. Sinister Prime replies that while he has nothing against women, he has nothing for them either. Using his creation engines, more Sinisters will be produced and males will take labors meant for women. If the engines malfunction, half of the population will become female to maintain reproduction. As soon as the engines are fully repaired, they will change back to male form.

Suddenly, a Moloid crawls to the surface and Sinister Prime shoots him down. Sinister Prime explains that the Sinisters took over the Moloids’s caverns to establish Sinister London after their battle with the X-Men. He is also aware that the X-Men obtained the powers of the Phoenix. Reporter Sinister asks what he will do when they attack Sinister London, but Sinister Prime doesn’t answer. Reporter believes he is dodging the question, but Prime says that he is merely delaying the answer.

Prime gives Reporter a tour of Sinister London, which was built using Celestial energies. Afterwards, he takes him to his castle. Reporter asks to be taken to Prime’s quarters. There, he offers to take a picture of the king, but his camera is in fact a device he uses to knock him unconscious.

As Prime wakes up, Reporter has strapped him to a chair on his basement. Reporter plans toThen, Prime’s red gem falls off his forehead, and Reporter realizes he has captured a clone. The real Sinister Prime comes to Reporter’s basement, along with a group of guards. As the guards arrest Reporter, Prime reveals that Sinister is a system, and rebels are part of the system. Rebellion is designed to test the system and challenge the status quo.

As Reporter is hunted down by Sabretooth Hounds, he does not regret having challenged Sinister’s will. On his final moments, he says that he will die a free man and his opponents are beasts.

On the palace, Prime talks with his royal decoy and remarks that he never answered Reporter’s question. As they go to the castle’s lower levels, Prime reveals that that he made clones of the X-Men to stop the real X-Men in case they attack him. Royal Decoy says that they will not stop Summers, and Prime agrees, but they will soften him for his newest project. Believing himself a modern Prometheus out to steal fire from outdated heavens, Prime reveals his newest weapons, a group of Madelyne Prior clones.

• Hope is on the run for her life, but can she outrun destiny?

• What has Mr. Sinister been doing since UNCANNY X-MEN #3? And what has he been doing while the X-Men have been fighting the Avengers? Find out here!

Retrieved from "https://heykidscomics.fandom.com/wiki/Uncanny_X-Men_Vol_2_14?oldid=1463015"
Community content is available under CC-BY-SA unless otherwise noted.