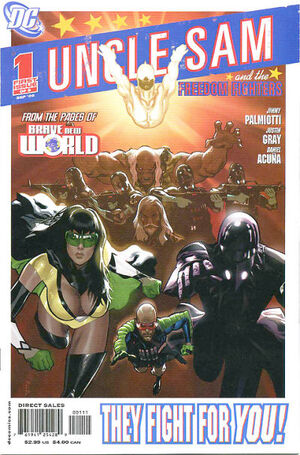 Uncle Sam is coming, Senator, and he wants you to quit misleading the people!

The story opens up with Senator Knight campaigning for President. During his speech, a disguised figure hides in the crowd of spectators.

In the next cutscene at a child's birthday party, Intergang Drug Runner Hargrove Brice is seen throwing a party for his son. Doll Man, disguised as an action hero, springs from the box and orders his team to attack the Intergang. Intergang members were dealt quickly and Hargrove was killed by injection.

Firebrand leaps in front of the crowd during the Senator's still going speech and warns Knight that Uncle Sam is coming soon and he needs to quit misleading the people. The local security quickly takes down Firebrand as Senator Knight continues his speech.

The next shows The Ray (Stan Silver) explaining how he had acquired his powers and a quick bio of himself. Following that, Doll Man (Lester Colt) is seen exercising and honing his skills before Emma interrupts him and shows Lester a new weapon.

Reporter for DTV, Anderson Peet, recieves an invitation to one of Stormy Knight's (Phantom Lady) private parties. Stormy tells her about why she lives like this and the things she had to endure as a super heroine.

Father Time and Senator Knight are seen walking down a walkway in an undisclosed place debating about the Patriot Act. During the debate, Father Time calls for Gonzo the Bastard Robot, who looks exactly like Knight and quickly kills him and takes his place. Father Time then begins interrogation treatment to Firebrand on the whereabouts of Uncle Sam. Firebrand remains loyal to Uncle Sam.

Two hours later, Father Time calls for a meeting with the S.H.A.D.E. team with an addition to Human Bomb, who recieves unpleassant comments from the other team members. Their next mission...to capture Uncle Sam.

Retrieved from "https://heykidscomics.fandom.com/wiki/Uncle_Sam_and_the_Freedom_Fighters_Vol_1_1?oldid=1465440"
Community content is available under CC-BY-SA unless otherwise noted.