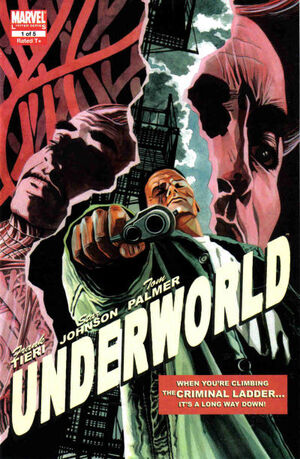 Jackie Dio was a big time mobster who is just finishing the last of few days of a 10 year sentence in the Cage, a maximum security prison mostly filled with non-super powered criminals. During his final days, he ends up in a fight with two skin-heads, which leads to the skin heads being crippled and Dio confined to solitary. There he's cellmates with a former costumed villain known as the Hippo. The Hippo suggests that Dio looks for a man named the Consultant once he gets outside. The Consultant is a man who has been providing crooks with the technology required to become super-criminals in order to stay competitive in the organized crime industry. Dio, having a distinct hate for costumed criminals, Dio rejects this advice.

Upon release, Dio realizes that a lot has changed in the 10 years he's spend in prison: DVD's, womens clothing, the cost of food at a baseball game. Dio decides to go and visit his former employer: Silvermane, who to Jackie's surprise is a cyborg plugged into life support. Silvermane tells Dio that the world has become a world of costumed criminals in the underworld, much or like "Vinces" world. Vince.. Dio recalls telling him to leave town after an altercation prior to going to jail.

When Dio asks if Vince has been seen around again, Silvermane tells him that he's been out the loop. He also tells Dio that if he's looking for employment, the Owl is the high ranking crime boss at the time. Going to see Owl, the Owl upon learning that Dio doesn't have an enhancements, the Owl calls his number one agent Mr. Pain, to find a place for the Owl. To Dio's shock and surprise, Mr. Pain turns out to be Vince.

Retrieved from "https://heykidscomics.fandom.com/wiki/Underworld_Vol_1_1?oldid=1727371"
Community content is available under CC-BY-SA unless otherwise noted.