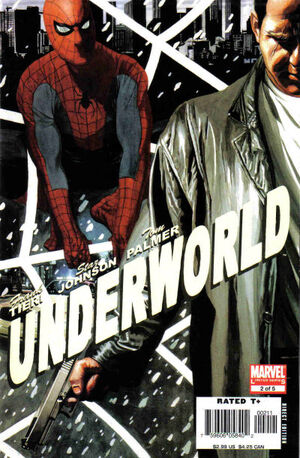 10 Years ago: Jackie Dio arrives at a meeting spot where he thinks he's supposed to meet Silvermane, however it turns out to be a police set up, put together in part by Vince. Jackie tries to escape, managing to critically injure or kill some of the police coming to arrest him, and is about to shoot Vince when he is stopped by Spider-Man who just happened on the scene. While the police try to capture Spider-Man, the web head gets away, and the webbed up Jackie is arrested and taken into custody.

Today: Jackie is being worked over by Vince, who is now the super-powered Mr. Pain, employed by the Owl. After beating up Jackie, Mr. Pain tells him, ironically, to leave New York as he has no privileges there. Dio would wake up in a hospital ward full of crooks who have been beaten up by Mr. Pain, a wing which has a nurse who is a little too enthusiastic about giving enemas. Jackie is once more told he should check out the Consultant by one of the injured men who lives there. Not wanting to stick around, and wanting to get revenge on Vince, and show the Owl that you don't need super powers, Jackie leaves the hospital before his scheduled enema.

A few days later, Jackie would target a shipment of a special gas called SSS.2 that the Owl's men is securing. Killing the pick-up men, Jackie checks out the product they are picking up. To his shock, one of the canisters of SSS.2 has been punctured and he ends up inhaling what he believes to be a lethal dose of gas.

Retrieved from "https://heykidscomics.fandom.com/wiki/Underworld_Vol_1_2?oldid=1727370"
Community content is available under CC-BY-SA unless otherwise noted.