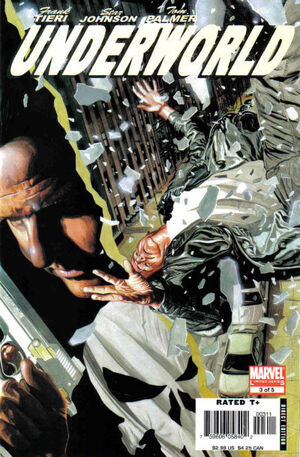 After recalling an event 10 years ago, when one of his men was shot by the Punisher and an altercation between himself and Vince over hiring super-powered criminals into the crime family, Jackie Dio finds himself going to Satan's Circus, the place he's been told to visit if he wanted to see the Consultant. However, Jackie isn't going to see the Consultant, he's come to find a doctor who can examine him without asking too many questions, after breathing in what he thinks was a lethal dose of the SSS.2 gas.

After convincing the super-villain clientele that he's a lot tougher than he looks, he's able to get the address to a doctor. Upon arriving at the strange (and slightly perverted) doctor's office, Jackie passes out. He comes around to the doctor pointing a gun at him, and Jackie reacts so quickly that the fired bullet doesn't hit him. The doctor reveals to Jackie that the SSS.2 gas was a new version of the super-soldier serum, and that by inhaling the gas Jackie's physiology has been enhanced to the most humanly perfect without becoming super-human. Injecting him with a needle to stabilize the mutation, it blurs Jackie's vision, the doctor gives him a special pair of sun glasses made by the Mechanic to stabilize his vision until the sensation passes. He gives Jackie the address to the Mechanic telling him that the Mechanic can set him up with weapons without any trouble.

When hearing about the Owl's strip joint called "Extra Points", Jackie decides to hit that location next. There Jackie meets opposition from two of the Owl's other enforcers: Grizzly and Boomerang, who have received upgrades from the Consultant. While Jackie is able to hold his own, he is overpowered by the crooks and thrown outside of the establishment (where he is spied by the Punisher who refers to Jackie as "The one that got away.") Jackie manages to make his escape when a man pulls over his car to check if he's okay.

Retrieved from "https://heykidscomics.fandom.com/wiki/Underworld_Vol_1_3?oldid=1727369"
Community content is available under CC-BY-SA unless otherwise noted.