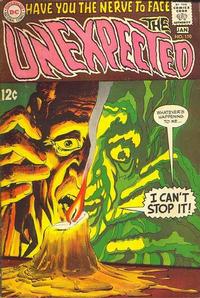 Brace yourself while I stir my cauldron and brew up for you a ring-a-ding weirdie of a tale!

Synopsis for "Tales of the Mad Mod Witch: Half a Man is Better than None!"Edit

A man who has embezzled thousands of pounds, wants to disappear from the face of the earth to escape his punishment. The opportunity rises when a spirit visits him from the Invisible World. The man tells a lie about his reasons to join the spirit's world. The ghost understands and begins to teleport the man's body to the unseen world. However, other spirits suddenly interrupt the proceedings, because they know the man was dishonest about his reasons to disappear. He is returned to the visible world, but as a man caught between two worlds -- half of him flesh and blood, the other a ghostly-gaseous self.

Appearing in "The Last Executioner!"Edit

Synopsis for "The Last Executioner!"Edit

Retrieved from "https://heykidscomics.fandom.com/wiki/Unexpected_Vol_1_110?oldid=1465496"
Community content is available under CC-BY-SA unless otherwise noted.