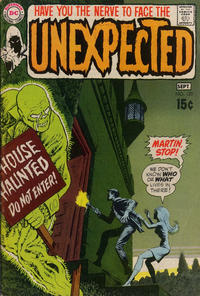 A disfigured teenager uses voodoo to take revenge on classmates who taunted him by disfiguring their looks. When they approach his cabin to take revenge, he panics and spills acid on the figurine that he had made for himself removing his facial features altogether.

Synopsis for "House Haunted, Do Not Disturb"Edit

Retrieved from "https://heykidscomics.fandom.com/wiki/Unexpected_Vol_1_120?oldid=1465516"
Community content is available under CC-BY-SA unless otherwise noted.