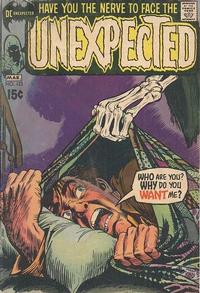 A man tries to get a wealthy businessman with a weak heart to give up the ghost and die that he can move in on the widow and her wealth, but as the ailing man's spirit moves closer to the realm of the dead, it is the greedy man's thoughts which give him the resolve to fight to remain in the land of the living.

Appearing in "Man in the Attic!"Edit

Synopsis for "Man in the Attic!"Edit

Synopsis for "Curse of the Sea Hag!"Edit

Retrieved from "https://heykidscomics.fandom.com/wiki/Unexpected_Vol_1_123?oldid=1465522"
Community content is available under CC-BY-SA unless otherwise noted.