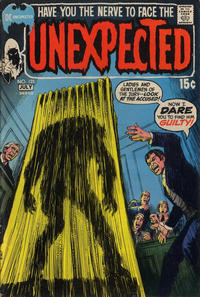 Appearing in "Screech of Guilt"Edit

Synopsis for "Screech of Guilt"Edit

A man commits a murder in the presence of a parrot who continually repeats the murdered man's last conversation with the killer. The gunman attempts to silence the bird, but it eludes him. He finally gets grabs the bird and attempts to drive it somewhere private where he can shoot it, but notices a cop tailing him and panics, releasing the bird from its cage. When the cop bypasses him, he realizes that he still has a chance to track the parrot on foot. The bird leads him into a parrot jungle where his buddies peck the man to death.

Appearing in "Escape Into the Unknown"Edit

Synopsis for "Escape Into the Unknown"Edit

Synopsis for "Know No Evil"Edit

Retrieved from "https://heykidscomics.fandom.com/wiki/Unexpected_Vol_1_125?oldid=1465526"
Community content is available under CC-BY-SA unless otherwise noted.