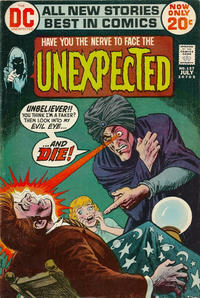 A man convinces himself that voodoo is real in order to deal with his rival for his wife's affection. He thinks that he has turned both of them into dolls and even when his little girl tells him that they were a gift, he doesn't believe her. The girl gives him a note which reveals that his jealous suspicions were unfounded, and his guilt causes his mind to unravel. The wife and rival stand in front of him and he can't see them, being focused only on the two dolls begging their forgiveness.

Appearing in "Trail By Torment"Edit

Synopsis for "Trail By Torment"Edit

Synopsis for "The Glowing Blood-Red Eye"Edit

Retrieved from "https://heykidscomics.fandom.com/wiki/Unexpected_Vol_1_137?oldid=1465550"
Community content is available under CC-BY-SA unless otherwise noted.