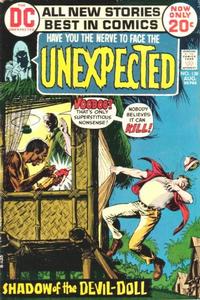 Appearing in "Strange Secret of the Huan Shan Idol"Edit

Synopsis for "Strange Secret of the Huan Shan Idol"Edit

A man who lusts for power meets an oriental man and his daughter who lead him through an underground cavern to collect a Buddha statue in exchange for a reward. The old oriental tells the man the statue grants power and the man resolves to seize it for himself. The old man wields a branding iron which he claims is shaped in the Mark of the Betrayer for deceivers. As the iron is pressed against his forehead the man passes out and revives in the shop where he met the Asian couple. The old man and his daughter are nowhere to be found and the owner assures him that he has owned the store for the last twenty years. The man feels that he must have imagined the whole encounter, but he sees that his reflection shows the Mark of the Betrayer burned into his forehead.

Appearing in "The Murder Machine"Edit

Synopsis for "The Murder Machine"Edit

Synopsis for "Shadow of the Devil-Doll"Edit

Retrieved from "https://heykidscomics.fandom.com/wiki/Unexpected_Vol_1_138?oldid=1465552"
Community content is available under CC-BY-SA unless otherwise noted.