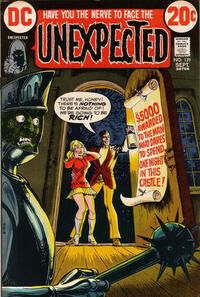 Appearing in The Two Brains of "Beast" BrackenEdit

Synopsis for The Two Brains of "Beast" BrackenEdit

A vicious con making an escape attempt suffers brain damage while being apprehended. The brain damage actually improves his disposition as he recovers and he becomes a model prisoner, even befriending the warden's little girl. As time goes on, he begins to feel the old angry personality reasserting itself so he concocts a plan to escape using the little girl as a hostage as he treks out into the swamp. He abandons her as the prison guards close in but she follows him, not understanding his change in demeanor. She falls into the water and yells for help as she can't swim. At first, he thinks to leave her to her fate, but he relents and dies saving her life.

Synopsis for "How To Get Rid of a Corpse"Edit

Retrieved from "https://heykidscomics.fandom.com/wiki/Unexpected_Vol_1_139?oldid=1465554"
Community content is available under CC-BY-SA unless otherwise noted.