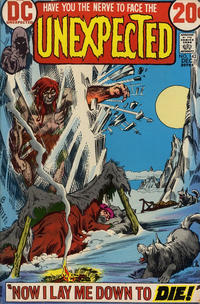 Appearing in "Let The Dead Sleep"Edit

Synopsis for "Let The Dead Sleep"Edit

A scientist finds a caveboy frozen in a block of ice and accelerates his development into a modern child. The boy grows up normally and goes to college, but when he falls in love and she rejects him, he reverts to his primitive form and is buried in ice once more when he attempts to drag his intended mate into the cave he issued forth from.

Appearing in "Now I Lay Down To Die"Edit

Synopsis for "Now I Lay Down To Die"Edit

Synopsis for "Kill Me If You Dare"Edit

Retrieved from "https://heykidscomics.fandom.com/wiki/Unexpected_Vol_1_142?oldid=1465560"
Community content is available under CC-BY-SA unless otherwise noted.