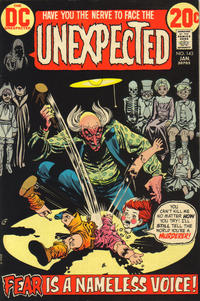 Appearing in "Fear Is A Nameless Voice"Edit

Synopsis for "Fear Is A Nameless Voice"Edit

A jealous puppetmaster murders his assistant and buries his body in the theater basement. Onstage with his wife, the dummies blurt out his secret much to his astonishment. He finishes the show early and then attempts to lure his wife into the basement to murder her as well, but the dummies warn her of his intentions. She flees to acquire the aid of the police. When she returns, she finds that her husband has smashed all the dummies, his mind completely gone.

Appearing in "What Evil Lurks In The Night"Edit

Synopsis for "What Evil Lurks In The Night"Edit

Retrieved from "https://heykidscomics.fandom.com/wiki/Unexpected_Vol_1_143?oldid=1465562"
Community content is available under CC-BY-SA unless otherwise noted.