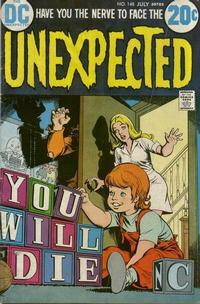 Appearing in "Baby Wants Me Dead"Edit

Synopsis for "Baby Wants Me Dead"Edit

A man murders the babysitter he is having an affair with and buries her body in the toolshed. His wife is a witness to this horrific scene and suppressed the memory, but it comes out when she spells out messages unwittingly with the baby's blocks. The baby imitates his mother's block arrangements, and before the man has a chance to dispose of his wife, the police come around looking for clues to the missing babysitter and the baby spells out 'see toolshed'.

Synopsis for "A Night In A Madhouse"Edit

Retrieved from "https://heykidscomics.fandom.com/wiki/Unexpected_Vol_1_148?oldid=1465572"
Community content is available under CC-BY-SA unless otherwise noted.