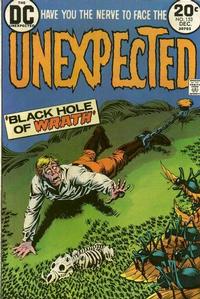 Appearing in "Who's That Sleeping In My Grave?"Edit

Synopsis for "Who's That Sleeping In My Grave?"Edit

A man falls in love with a woman who has had her head transplanted onto a robot body. He threatens the woman's guardian with death unless he does the same for him. The guardian complies but tells the man after the transplant that the girl now has a human body and he has taken the man's young body as they love each other. The dupe threatens to kill him, but his head rejects the robot body and he drops dead.

Appearing in "Wedding Bells For A Corpse"Edit

Synopsis for "Wedding Bells For A Corpse"Edit

Synopsis for "Black Hole of Wrath"Edit

Retrieved from "https://heykidscomics.fandom.com/wiki/Unexpected_Vol_1_153?oldid=1465582"
Community content is available under CC-BY-SA unless otherwise noted.