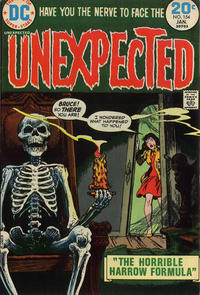 Appearing in "Murder By Madness"Edit

Synopsis for "Murder By Madness"Edit

When a woman meets her intended husband's family she begins to suspect they are mad and intend to harm her because of strange events, but it turns out that her intended is seriously disturbed and behind the shenanigans.

Appearing in "The Horrible Harrow Formula"Edit

Synopsis for "The Horrible Harrow Formula"Edit

Synopsis for "The Stalking Shadow's Prey"Edit

Retrieved from "https://heykidscomics.fandom.com/wiki/Unexpected_Vol_1_154?oldid=1465584"
Community content is available under CC-BY-SA unless otherwise noted.