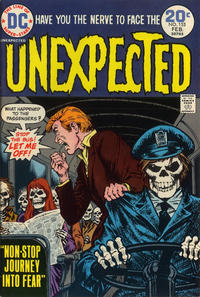 Appearing in "Non-Stop Journey Into Fear"Edit

Synopsis for "Non-Stop Journey Into Fear"Edit

A thief mortally wounded by a police bullet buys a bus ticket to Limbo town. After riding the bus for awhile he realizes the girl next to him, and everyone else on the bus, is a skeleton. The driver lets him out and he tells the man at the depot there has been some mistake. The man agrees and gives him a return ticket. The bus driver says he will expect him again some time. The thief finally succumbs to his wounds exiting the bus. He makes the same trip to Limbo town once more and when the man at the depot sees him he says that it was worth returning for such a short stay.

Synopsis for "The Creep In The Caboose"Edit

Retrieved from "https://heykidscomics.fandom.com/wiki/Unexpected_Vol_1_155?oldid=1465586"
Community content is available under CC-BY-SA unless otherwise noted.