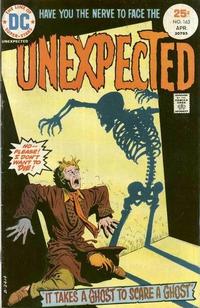 Appearing in "Room For Dying"Edit

Synopsis for "Room For Dying"Edit

A man makes a deal with a rich tycoon that he will stay locked up for ten years for one million a year. The wealthy man begins to worry after five years that he will be bankrupted so he introduces drugs into the man's food, but he has learned wisdom through books which allow him to resist. He lasts the ten years and the now bankrupt man hands over the money, but is told to keep it. The prisoner has learned to enjoy his life of leisure.

Synopsis for "It Takes a Ghost to Scare a Ghost"Edit

Retrieved from "https://heykidscomics.fandom.com/wiki/Unexpected_Vol_1_163?oldid=1465602"
Community content is available under CC-BY-SA unless otherwise noted.