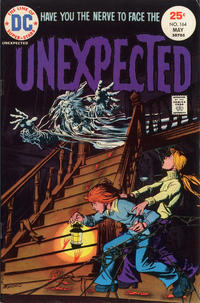 Appearing in "House of the Sinister Sands"Edit

Synopsis for "House of the Sinister Sands"Edit

Two kids are enjoying a day at the beach when they come across a huge sand castle large enough to enter. Their dog enters and they hear it making frightened sounds so they follow inside. They encounter large sea creatures inside and the dog is transformed into one. The dog still remains protective of the kids, however, and holds off the other sea creatures until the kids escape the rising tide which washes the sand castle out to sea.

Appearing in "The Big Heat"Edit

Synopsis for "The Big Heat"Edit

Synopsis for "The Haunted Lighthouse"Edit

Retrieved from "https://heykidscomics.fandom.com/wiki/Unexpected_Vol_1_164?oldid=1465604"
Community content is available under CC-BY-SA unless otherwise noted.