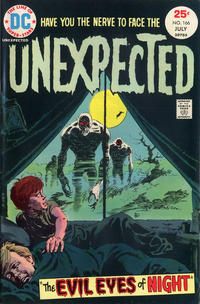 Appearing in "The Evil Eyes of Night"Edit

Synopsis for "The Evil Eyes of Night"Edit

A boy spending the night outside in a tent becomes frightened so he goes to the nearby house where he sees through the window that a man is holding another at gunpoint. The intruder has broken in for food but the man wielding the gun wants him to open a locked safe for him. The safecracker gets it open while gunman drags the boy inside and threatens to shoot them both. His mother comes into the room in a wheelchair and the gunman reveals that he murdered his father and stuffed his corpse inside a suit of armor, and that he's going to kill all of them. The mother runs him over with her wheelchair and he flees outside. A shot rings out and they find the man dead by the boy's tent since he had shot himself when he tripped over one of the tent's moorings.

Appearing in "The Point of Death"Edit

Synopsis for "The Point of Death"Edit

Synopsis for "Spirit, Why Do You Haunt Me?"Edit

Retrieved from "https://heykidscomics.fandom.com/wiki/Unexpected_Vol_1_166?oldid=1465608"
Community content is available under CC-BY-SA unless otherwise noted.