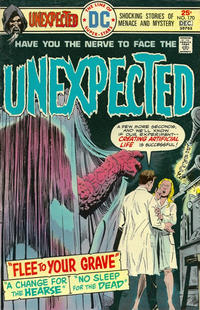 Appearing in "Flee To Your Grave"Edit

Synopsis for "Flee To Your Grave"Edit

A scientist tries to make the body buoyant but helium reverses the process. His assistant wants him dead so he gives him an overdose which mutates him into an ugly large floating monster. He hides from the police in a parade behind a Superman balloon but when he gets to the end, the police open fire. The helium from the destroyed Superman balloon changes him back and he breaks his fall by landing on the assistant, killing him.

Appearing in "No Sleep For The Dead"Edit

Synopsis for "No Sleep For The Dead"Edit

Synopsis for "A Change For The Hearse!"Edit

Retrieved from "https://heykidscomics.fandom.com/wiki/Unexpected_Vol_1_170?oldid=1465616"
Community content is available under CC-BY-SA unless otherwise noted.