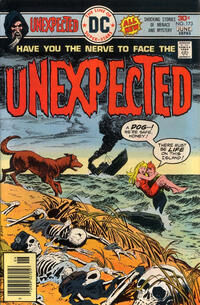 Appearing in "What Scared Sally?"Edit

Synopsis for "What Scared Sally?"Edit

Two felons take refuge in a tunnel that runs under a cemetery that a boy and his sister show them. The kid says that they can get out through the mausoleum at the other end, so the criminals collapse the tunnel on the kids to silence them. The parents come looking for the children and realize they must be trapped below and dig them out. They are in shock from their ordeal and are taken to the hospital. The father remarks he has had a tiring day as the last member of the mausoleum family has died and he has sealed it up for good.

Appearing in "I, the Imprisoned Brain"Edit

Synopsis for "I, the Imprisoned Brain"Edit

Synopsis for "Hunger of the Dying"Edit

Retrieved from "https://heykidscomics.fandom.com/wiki/Unexpected_Vol_1_173?oldid=1465622"
Community content is available under CC-BY-SA unless otherwise noted.