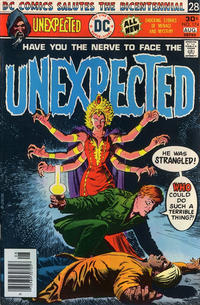 Appearing in "Gauntlet of Fear"Edit

Synopsis for "Gauntlet of Fear"Edit

A cult leader uses fear to break men's wills and get them to follow any command. He kidnaps a psychologist in order to condition him to assassinate the government leader. The psychologist recognizes that the cult leader has a phobia of dirt, and when he tosses bugs on him his followers realize that he is just as afraid as any of them and they pursue him to his death.

Appearing in "Sands of Time"Edit

Synopsis for "Sands of Time"Edit

Synopsis for "The Long Arms of Death"Edit

Retrieved from "https://heykidscomics.fandom.com/wiki/Unexpected_Vol_1_174?oldid=1465624"
Community content is available under CC-BY-SA unless otherwise noted.